In our last post, we announced Trouserwatch - a surveillance mission on executive remuneration. Here we explain how fat cats' pay has soared.

Executive pay is out of control. FTSE 100 CEOs now earn over 180 times the pay of a median worker. They're paid an average of £4.7m and it's been growing steadily year on year.

The fat cats feel no need to justify their gargantuan pay packets either. Listen to Helge Lund - BG Group CEO - having been awarded £25m after just 3 months of work.

"I understand the interest in the subject of pay... but it is difficult for me to comment on my own remuneration."

Difficult to comment?! The man is no mouth and all trouser.

Perhaps he thinks that we, the great unwashed, couldn't possibly understand executive remuneration. But in fact, we understand only too well.

Everyone understands a stitch up.

Scroll down to read how it works...

Inevitably, remuneration committees are stuffed with executives from other companies. These are professional yes men who share a vested interest in high pay:

Tom and Dick present a nice package for Harry; Harry and Tom rubber stamp a huge bonus for Dick; then Dick and Harry sign-off a trouser-buster for good ol' Tom.

Legendary investor, Warren Buffet, is a big critic of this corporate circle jerk. There is no way a CEO should choose the guard dogs that stand between him and his shareholders' funds.

As Buffett puts it:

Read our next blog to uncover stitch-up #2.... which may be even more surprising. 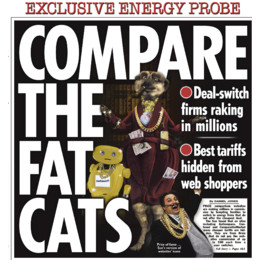