SSE's price freeze is subterfuge. It should not obscure the fundamental problems of an uncompetitive industry.

SSE can well afford the grand political gesture of a price freeze.

Since 2005, energy companies have doubled the average British dual fuel bill. In the last four years, they quadrupled their profits from supplying British homes. So SSE's announcement should not obscure the fundamental flaws of the energy industry. If the very same SSE can increase profits by £1.5m despite being abandoned by 250,000 exasperated customers, as happened in 2013, it's fair to say the interests of energy companies and consumers are not well-aligned.

Consumers are happiest when companies do battle for their custom. Yet competition in the energy market does not resemble an all-out scrap so much as a siblings' playfight. Three of the Big Six energy companies have almost the exact same market share in gas in 2012 as they did in 2007. Electricity tells a similar story. Those five years of free market free-for-all could not reduce the Big Six's market share below 95%.

That's why Britain's regulators should tomorrow confirm what everyone else already knows: the energy market is broken. The Competition and Markets Authority will then set about finding long term solutions to the industry's most pressing problems. And until their proposals take effect some time in 2016, we will all keep getting ripped off. Sigh.

When presented with the dead parrot of energy market competition, the Big Six use spurious switching statistics to insist that is alive and well. Energy UK spent much of January shouting from the rooftops that last November had seen a record level of switching. However whilst it was indeed a record level for a single month, 2013 saw the second lowest number of annual switches since records began. And if it weren't for that bumper November, last year would have marked a new low for Britain's annual switches.

Those switches come increasingly from a hard core of consumers who change supplier "four or more times" a year. These people are resigned to chasing loss-leader tariffs, which are effectively subsidised by those customers who never switch say the IPPR. Ofgem believe those non-switchers account for 62% of the population. Their inertia owes in part to a proliferation of tariffs, whose vast complexity made the energy market even more difficult for normal human beings to to decipher.

Thankfully, Ofgem's Retail Market Review have simplified matters. Now energy companies can offer a maximum of four tariffs for each fuel. Only under one circumstance can they create a new tariff, and that is for a 'collective switch'. In other words, if a big group of people demands a better deal together, energy companies can bid for their custom. It looks a lot like competition. And it won't take two years to happen.

There isn't time to wait for a competition enquiry to report when British people need cheaper energy now. A mass collective switch is our best chance of making that happen. Why wait for politicians to solve our problems when we can take matters into our own hands? That's why we set up The Big Deal - a nationwide collective switch on energy.

The political implications of this movement are exciting or terrifying, depending on your perspective. The New Statesman has already considered the potential of "quasi-unionized consumers" and the technological forces behind The Big Deal are irresistible. The internet makes it easy to join communities and derive value from their membership, even if you never meet your fellow members. Britons are using our website to form a community whose collective bargaining power brings them maximum savings with minimum hassle.

But the Big Deal is no mere savings club. People have grown tired of being pushed around by big business and The Big Deal helps them push back. Energy companies have long been suspected of acting together to increase their power. It's time we customers did the same thing. 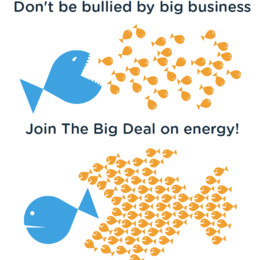 Response to inquiry into Big Six | The Big Deal