We all feel like we're getting a raw deal on our energy.

But at least you're not getting as bad a deal as these guys.

Unless you ARE these guys.

In which case you need to sort out your situation pretty urgently.

Is this you or anyone you know?

"I don't worry about my gas bills" you say, assuredly, dipping a Rich Tea biscuit into your steaming mug of Yorkshire tea. "I'm with British Gas. Have been for years. They wouldn't charge a loyal customer over the odds."

Oh yes they would. A loyal customer is EXACTLY the kind of person they'd charge over the odds.

Why? Because they know that you're never going to leave. So they can charge as much as they like.

You're probably paying hundreds of pounds more than your neighbour who just switched to them.

You wised up to this racket a while ago. So you went to one of the comparison sites and switched to the best deal on the market.

Problem is, that was over a year ago. And deals don't last forever. So once your deal was up (probably after 12 months), you got bounced onto the most expensive deal your supplier offers.

This is the dreaded 'standard variable' tariff. There's a perverse irony in the fact that these rip off rates are called 'standard'. But that's how they are seen by suppliers - business as usual.

You see, like bowls of Crunchy Nut Cornflakes, one switch is never enough. You have to switch again. And again. Otherwise you end up on that standard variable.

It's a treadmill. And we hate it. How many times do you have to tell the energy market "I don't want to get ripped off anymore!"? That's what we're trying to sort out at The Big Deal.

Bills are boring. We get that. And you're not. So you don't really engage with this stuff.

Last year we found that almost 1m Londoners never even open their bills. And it's not hard to guess why. It's not like a Christmas stocking - there's never anything nice in there.

The sad thing is, you probably know you're getting ripped off. But you put it to the back of your mind and ignore the horribly inevitable - like taxes, death and dancing with your aunt at a family wedding.

Switching for the first time is like a rite of passage. It doesn't mean you're boring. It means you're smart.

AND IT TAKES LITERALLY THREE OR FOUR MINUTES, WE PROMISE.

You live in the outer reaches of the British Isles. And as such, you have to deal with the London-centric culture that pervades this once green, still pleasant but city-obsessed land.

It gets worse, we're afraid.

If you live in the South West or North Wales, you will be paying significantly more for your gas than someone in the capital.

Why? Because of transportation costs. We get a lot of gas from Russia, Vladimir willing. And the further west it has to go, the more it costs to deliver.

This one really sucks. If you have a payment meter, you have to pay for your energy upfront. And that's bad enough.

But what makes it worse is that you have to pay more too. And that's a disgrace.

If you're paying upfront, you pose no credit risk at all. There is no danger of you not paying the bill, because you paid for your energy before you even used it.

So in what world is it fair that you have to pay MORE for that energy than someone who gets it on credit? Sometimes this affects families who do not have a whole lot of money to burn on heating the home.

There is a certain snootiness about independent suppliers in some circles. As though you might somehow be getting an inferior product if you switched away from the Big Six.

Let's put that one to rest.

If you switch from SSE to First Utility, the energy coming into your house will be EXACTLY THE SAME. It'll just cost less.

"But what about customer service?" cries the Traditionalist.

Nearly all customer satisfaction reviews find the best service come from independent companies who are trying to prove themselves.

The worst reviews come from the leviathans who inherited millions of customers years ago. They know most will never leave, no matter how high their bills or how poor their service.

Are you one of these six types? If you are, do consider switching.

With the cheapest deal in the land available right here on Big Deal, there has never been a better time to get your energy sorted. 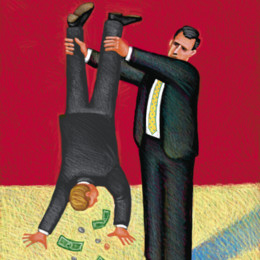 Why 'Loyal' Customers Get The Worst Deals On Energy